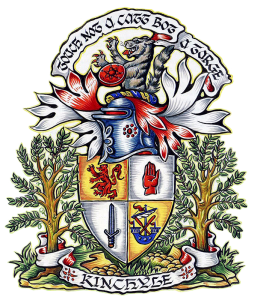 The Tartans of Clan MacBean

An overview and news of a new Hunting Tartan

by Philip Beddows, Seanachaidh to the Chief and Clan Historian - 2021

Over the past year or so, our Acting Chief Richard McBain of McBain, younger, has been working with Scotland’s leading authority and historian on tartan, Lt. Colonel Peter E. MacDonald, and myself on a project to bring the MacBean tartans into better order. Remarkably, the Scottish Register of Tartans (‘SRT’) listed 10 registered tartans for the names MacBean and McBain!

All of the tartans above can be worn by all clansmen and women.  We look forward to sharing news of the new ‘MacBean Hunting’ tartan in the not-too-distant future.

The modern Clan Tartan had gone through many iterations since its creation in the nineteenth century, resulting in multiple versions being recorded by the SRT and used as templates by different weavers, all with small variations in threadcounts, shades of colour and resulting setts patterns. As the type of dyes used to colour the thread changed, so did the look of tartans – earlier more natural dyes produced tartans which were less ‘loud’ and the effort to rediscover more traditional colours led to the creation of ‘ancient’ tartans, which generally consisted of more muted colours, compared with the brighter ones that were labelled ‘modern’ tartans. Weavers can produce a wide range of tartan cloth using the same threadcount but with different shades of colour, from modern to ancient and everything in-between – these are not different tartans but different representations of the same tartan. One of the patterns registered by the SRT was an old and historic MacBean tartan that had been completely overlooked by the tartan trade in the nineteenth century and until now never given official recognition – an omission that needed to be put right. Additionally, in more recent times, a tartan was produced and recognised by the Chief as a ‘hunting tartan’ but was simply the standard clan tartan with muted shades of colour. Unknown at the time was the fact that under the protocols and conventions that govern the creation of new tartans, since this tartan was the same pattern as the standard clan tartan, it could not in fact be considered a separate tartan and cannot therefore be classified as the clan’s ‘hunting tartan’. Consequently, we are in the process of completing design and production of a bona fide ‘MacBean Hunting’ tartan for clansmen and women to be able to wear. This is a very exciting project, and the new tartan will be a design that pays tribute to all of the earlier tartans, look very authentic and distinguished, and like almost all other hunting tartans it will be appropriate to wear out on the hill as well as at a formal function. The new ‘MacBean Hunting’ tartan will be revealed in due course and be featured in the Spring 2022 edition of The Register, and we are sure it will prove to be very popular and a source of pride for our clan.

We must pay tribute to the work of Peter MacDonald who has been of great service to the clan and done a fantastic job in guiding us through a careful review and detailed historical research of all records of tartans named MacBean and McBain.  This has helped clarify which of the versions of the modern tartan should be the standard tartan, which other MacBean tartans should be officially registered, and how these should be classified and named.  Peter continues to advise on the final aspects of design of the new ‘MacBean Hunting’ tartan.

For now, what follows below is a review of the four MacBean tartans that are now officially recognised and properly recorded in the Scottish Register of Tartans.

This tartan is very close to the design of the standard modern MacBean tartan, incorporating some minor variations in threadcount and colour. It was the official tartan named ‘McBain’ recorded with its threadcount in the Lord Lyon’s Matriculation of Richard’s grandfather, Hughston McBain of McBain, as 21st Chief (dated 8th March 1960). Because of this it became generally labelled as ‘McBain (Lord Lyon)’. The Chief’s family has worn this tartan alongside the standard clan tartan, and other members of the clan have worn it at times it has been in production.
To differentiate it from the clan’s standard tartan, it has been decided to amend its registration and give it the name ‘McBain Chief’. This suitably retains a name that remembers that it was created by Hughston McBain when he was recognised as Chief – a significant and historic moment that ended a period of c.170 years during which the clan had been without a chief. In Scottish law, a clan without a chief has no official standing, so by being matriculated as chief, Hughston McBain brought the clan back into official existence after an incredibly long period of dormancy.

The modern MacBean clan tartan first appeared in the nineteenth century, around the same
period of time as tartans were created and produced for other clans. Before that, members
of the Clan MacBean wore the Mackintosh tartan, which is what our hero and 14th Chief Major Gillies ‘Mor’ MacBean was illustrated wearing in R. R. McIan’s well-known picture of im at Culloden, which accompanied the article on the clan in James Logan’s 1845 book ‘The Clans of the Scottish Highlands’. The modern MacBean tartan originated from this famous picture of Gillies MacBean. Whilst McIan painted Gillies wearing a kilt of Mackintosh tartan, for his hose the artist painted a tartan pattern akin to one manufactured by Wilson of Bannockburn, called the ‘Birrell Sett’. Thus, it was that the tartan trade used this ‘Birrell’ pattern as the model of the modern MacBean tartan.
Of the multiple variations of the modern MacBean tartan that had existed, it has been decided that the one that is now officially recognised as the standard clan tartan is the oldest version dated to 1880, which appeared in ‘Clans Originaux’, a book of tartan samples otherwise called a ‘swatch book’. It is this pattern that is produced by The House of Tartan, under a special arrangement with the clan association when ordered via the clan’s website. Lochcarron of Scotland also produce a version of this tartan in attractive colour shades as ‘MacBean Ancient’.

This tartan was designed by the late James D. Scarlett, a respected expert and author on
tartan and well-known member of Clan Chattan. He created the MacBean Dress tartan in 1972 for Hughston McBain of McBain’s wife Kathleen née Keith, a very keen Scottish dancer who competed in competitions. It was based on the standard MacBean tartan pattern and is similar to the private dress tartan that Scarlett designed for his then fiancée Meta MacBean. As Scarlett wrote in his ‘The Tartans of Clan Chattan’ (2002): The Dress tartan takes the usual form, with the pattern woven on a white, instead of red, ground; all black is omitted from the main pattern but there is a composite black/red/black overcheck on the main white ground. Dress tartans are more often worn as a formal evening gown by women, but also by men in formal evening wear Highland dress.

As I wrote in the Spring 2019 edition of The Register (‘Re-discovery of the MacBean of Tomatin tartan’), James Scarlett had included this among the MacBean tartans he detailed in his book on ‘The Tartans of Clan Chattan’, describing it as ‘a genuine old sett and, as such, worthy of note’. Its precise date of origin is unknown but what we know is that in 1872 William Munro MacBean of New York was in correspondence Colonel William MacBean of Tomatin who had confirmed that the tartan was worn and recognised by himself as the MacBean tartan, from the fact that a very ancient piece of tartan cloth, woven in this pattern, had been found in the house of Tomatin.
Peter MacDonald rediscovered the old sample that Scarlett referred to, which had been lost for decades in the archives at Inverness. It was produced from the late nineteenth century by ‘Alexander McBean & Sons’, tailors & woollen drapers in Inverness, and Peter found another sample in Edinburgh in the collection of the Highland Society of London. In both these cases, the tartan was simply labelled ‘MacBean’, with no mention of Tomatin. The largest antique piece of this tartan that survives is a c.100+ year old blanket coincidentally bought by my own great-grandfather, Colonel Alexander McBean of Tyninghame, Tettenhall, on one of his
trips to the Highlands. The MacBean of Tomatin tartan is based on the
Mackintosh clan tartan, with a variation on threadcount and the addition of a
dark blue stripe across the main red ground. It is now officially recognised
as one of the clan’s tartans and retains the name ‘MacBean of Tomatin’ so
that its connection with that place and branch of the clan will be remembered.