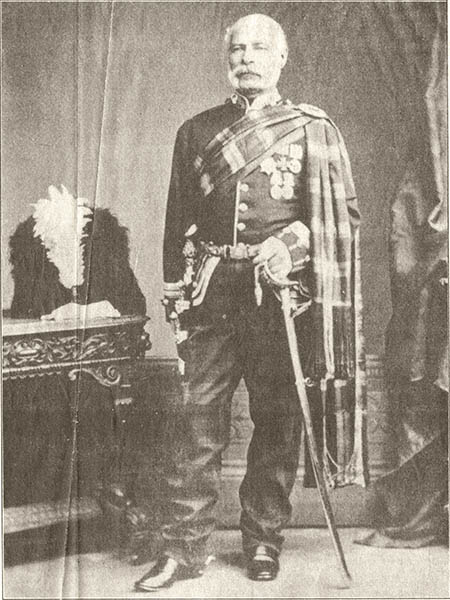 THE son of an Inverness shoemaker, William MacBean was one of a rare breed of Highland soldiers who rose from the lowest rank of the British Army to join the elite corps of senior officers.

It would be considered an achievement even today, but in the rigid structure of Victorian society that kind of upward mobility was the stuff of which legends are made.

Dingwall and the Black Isle made a local hero of Major General Sir Hector MacDonald, the victor of Omdurman, while Inverness honoured the military success of Major General William MacBean, V.C.

He joined the Army as a private soldier, served with distinction in the Crimean War and the Indian Mutiny, where he earned the Victoria Cross at the Relief of Lucknow, and eventually rose through the ranks to become Colonel of his regiment.

He was born in Inverness in January 1819 and at the age of 16, much against the wishes of his parents, he enlisted in the 93rd Sutherland Highlanders.

“General MacBean was the son of a shoemaker in Inverness and his career has often been quoted as a remarkable example of promotion in the army,” observed the Courier after his death.

“It was during the Crimean War that, with the hearty concurrence of his commander Colonel W. B. Ainslie, he received a commission as ensign. From this point honours lay thick in his way. Soon after receiving his commission he was ordered to remain behind his regiment at Varna, in charge of the men invalided there.

“At this place there were also stationed a number of French and Turkish soldiers between whom, on the occasion of some dispute, Ensign MacBean interfered so successfully that the Sultan rewarded him with the Order of the Medjidie — a distinction which the recipient, with characteristic modesty, did not mention to his friends till some time afterwards, when some accidental reference happened to be made to what had occurred.
According to one account, MacBean became well acquainted with Florence Nightingale while in the Crimea, and was one of the first professional soldiers to recognise the importance of her work among the men.

“Rejoining the 93rd before Sebastopol the deceased shared with his comrades the dangers connected with the siege; and he afterwards bore a part in the expedition to the Sea of Azoff, and in the capture of Kertch and Yenikale,” the Courier’s obituary tribute went on.
“Shortly after its return to England from the Crimea the regiment was dispatched to India; and with it Captain MacBean went through the campaign of 1857 and 1858, being present at the relief of Lucknow, and so distinguished himself as to be honoured with the Victoria Cross. It is said that his courage in attacking and cutting down eleven men with his own sword earned him this distinction.”

One of his supposed ancestors, Gillies MacBean of Kinchyle, is said to have died performing a similar feat at the Battle of Culloden, slaying 13 dragoons single-handed and on foot.

After Lucknow one of the Indian princes is said to have offered MacBean the command of his army, but the invitation was declined “even though a handsome fee was added to the offer”. MacBean’s active service came to an end with the suppression of the Mutiny, but he remained an officer in the 93rd (which later became the Argyll and Sutherland Highlanders) and in 1873 he was gazetted as Lieutenant Colonel.

He was given the rank of Major General on his retirement from the regiment in January 1878, but he died at Woolwich a few months later, on 22nd June, and was buried in the Grange Cemetery, Edinburgh.

“Notwithstanding his presence in many posts of danger, Major General MacBean never sustained any very serious wound,” the Courier noted.
“He has now died at the age of fifty-nine, after a comparatively short illness.”

The Times of London also paid tribute to the Inverness-born “ranker”, describing him as a man distinguished in every rank and idolised by his regiment.

General MacBean was married on his return from India to a Miss Beveridge from Kirkcaldy, but she and their only child predeceased him.
He is now virtually forgotten in the town of his birth, although his bust can still be seen in a corner of the Town Hall. It was presented to the town in 1897 by the family of his brother, James MacBean, a former Dean of Guild.

(Picture: The Joseph Cook Collection. This unique photographic record of the town a century ago and more is featured week by week, only in Tuesday’s Courier.)

This site uses Akismet to reduce spam. Learn how your comment data is processed.